VARIABILITY IN TIME IN THE ELECTRONIC HEALTH RECORD: WHAT IS IT COSTING YOUR GROUP?

As of 2017, 96% of non-federal acute care hospitals had an electronic health record (EHR). Hospitalists interact with the EHR for several hours each day. Many studies have suggested a direct correlation between physician burnout and frustrations with the EHR. Data has been published regarding physician time studies in the outpatient setting, but there is a paucity of data regarding time spent in the EHR in the inpatient setting.

We sought to understand the variability in time spent in the EHR and opportunities with the EHR in our hospital medicine (HM) group.

Data for 19 days in September 2018 was obtained from our EHR vendor, Epic, that tabulated the time each hospitalist in our large, academic safety-net hospital spends with the EHR as mean active minutes. The number of notes completed was also reported. We then calculated the mean number of minutes spent per note over the study period which we extrapolated to time spent in the EHR to care for 14 patients – our estimated average daily patient census. We then used these time data to stratify the physicians into quartiles. We compared time spent in EHR of 1st quartile and 4th quartile physicians and estimated time opportunity of improving time spent in EHR of 2nd, 3rd, and 4th quartiles to the mean of the 1st quartile. Using MGMA data, we converted time opportunity into FTE and dollars. We then correlated the time spent in the EHR with years of experience. We excluded physicians on teaching services, nocturnists, and physicians whose primary role was admissions.

There is a large variance in time spent in the EHR, even when comparing providers in the same HM group working at a single hospital. For the 30 providers in the bottom 3 quartiles, reducing their time in the EHR to the mean of the 1st quartile (3.08 hours/14 patient encounters) could save 11,928 hours per year or nearly 6.6 FTE. This translates to $2.03 million annually, not including the cost savings of decreasing burnout. These data suggest resources should be invested to improve hospitalist EHR efficiency. Further studies are needed over longer time periods and comparing time in the EHR with quality metrics. 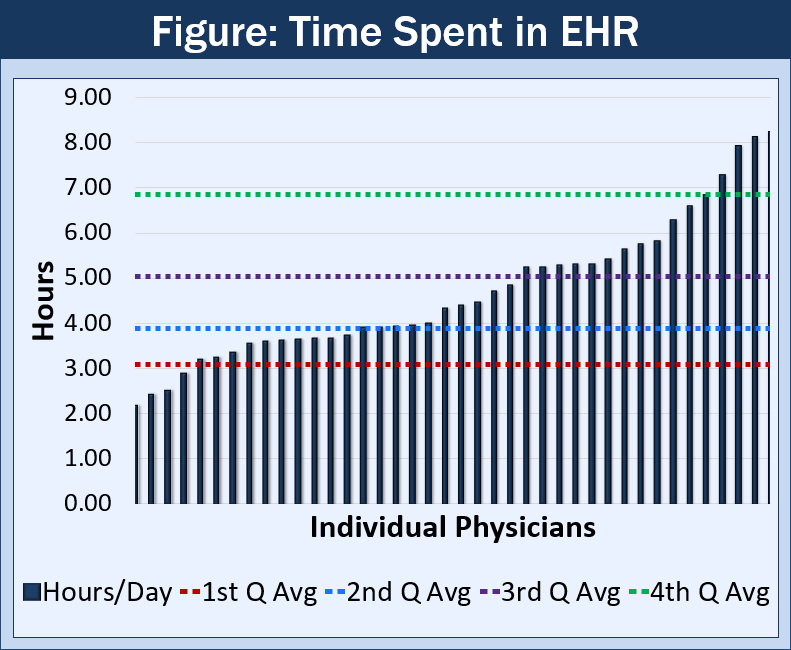 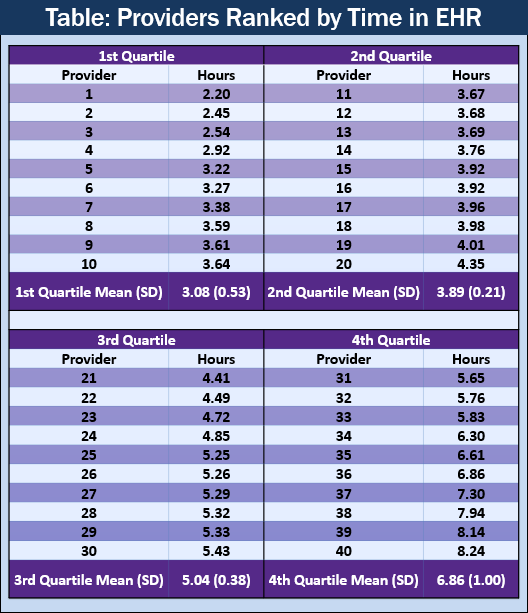